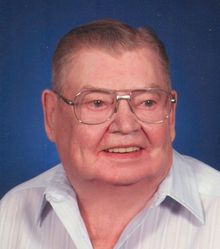 Life History for Vernon Cassell
Vernon Cassell, age 83 of Alexandria passed away Wednesday, August 14 at his home in Alexandria, MN.
On July 25, 1930 a baby son was born to James Philo and Alice Martha (Jung) Cassell in Orange Township, Douglas County, MN. They named him Vernon James and he attended school in Alexandria, graduating with the Class of 1948. Vernon was later drafted into the Army during the Korean War, serving from 1951 - 1953. On September 5, 1954 he married LaVonne Kalpin. After a year at the Gale Institute in Minneapolis taking instruction on telegraph, Vernon took a position with the Great Northern Railroad. In April of 1963, Vernon went to work as a rural mail carrier for the U S Postal Service, delivering for postal customers in the Nelson and Carlos, MN area. He retired in 1990 after thirty years of service. On November 9, 1985 Vernon was united in marriage to Lorraine Anderson. Vernon was employed as a bus driver for the Alexandria School District #206, retiring in 2000 after nine years.
In addition to attending the Calvary Lutheran Church in Alexandria, MN, Vernon also belonged to the Alexandria VFW Post and was a member of the Eagles Club.
Vernon had many interests and hobbies. He spent many hours restoring old cars and tractors and working on various woodworking projects in his garage. In the summer he also liked to be outdoors mowing the grass or working in the garden. Fishing, snowmobiling and traveling were other activities he enjoyed. Vernon liked to socialize and looked forward to meeting his buddies for conversation and games of cribbage.
He is survived by his wife, Lorraine Cassell of Alexandria, his children, John Cassell of Osakis, Jodi Johnson of Parkers Prairie, James Cassell of Osakis and Julie Cassell of Alexandria, MN; 6 grandchildren; 8 great grandchildren; a brother, James (Carol) Cassell and a brother-in-law, Ron Johnson, all of Annandale, MN; 2 uncles, Robert and Marlin Cassell of Mpls, stepchild, Richard Anderson; 3 step grandchildren; 8 step great grandchildren; many nieces and nephews.
Preceding him in death are his parents, infant son, Scott Cassell; step great grandchildren, Scarlett and Hollis Anderson; a sister, Jeanette Johnson, a son-in-law, Clinton Johnson and a daughter-in-law, Peggy Cassell.
Funeral services for Vernon were held on Friday, August 16 at 2:00 pm at the Calvary Lutheran Church in Alexandria with Rev. Rollen Halvorson officiating. Organist is Amy Engel and soloist is Dana Hetland. Interment was at the Geneva Cemetery in Alexandria. Casketbearers were Dylan Timms, Zachary, Shawn and Jason Schneiderhan, Chris Faber and Alan Cassell.
Arrangements handled by the Roy-Hetland Funeral Home, Osakis, MN.

To order memorial trees or send flowers to the family in memory of Vernon Cassell, please visit our flower store.