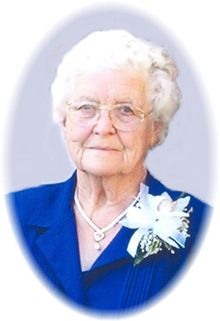 Life History for Vicki Mikkelson
Victoria Mikkelson, age 90 of Osakis entered the peace of Heaven on Monday, December 28, 2009 while a resident at the Community Memorial Home in Osakis.
Jens O. and Minnie (Knutson) Jensen were the proud parents of Victoria Caroline Jensen, who was born to them on November 11, 1919 in West Union Township, Todd County, MN. Vicki grew up on the family farm and ended up living in Todd County all of her life. She was married on June 2, 1940 to Clinton Mikkelson at her Dad's farm in West Union Township. They made their home on a farm in Gordon Township. In addition to helping run the farm, Vicki worked as a childcare provider for area families and also provided her cleaning services to many area residents. During the summer months she also found time to do cabin cleaning and kitchen work for Linwood Resort on Lake Osakis. Vicki was a member of the Salem Lutheran Church and belonged to the Ladies Aide and the church quilting group.
Besides being an excellent cook, baker and canning pro, Vicki will also be remembered for the many delicious Scandinavian holiday treats she made with her family, such as lefse, flat bread and many types of cookies. Vicki also liked to meet for the weekly quilting sessions, going snowmobiling, dancing, traveling and hosting neighborhood card games. She was happiest of all just being at her home in the country spending time with her family and many grandchildren. She was a hardworking wife, mother, grandma and sister who will be dearly missed by all who knew her.
Vicki is survived by her children, Minnie (James) Jezierski of St. Louis Park, Carolyn Holty of Osakis, Dorothy (Ronald) Paulson of Sauk Rapids, Gary (Virginia) Mikkelson and Karen (Mark) Ferris, all of Osakis, Clinton LeRoy (Sherrie Johnson) Mikkelson of Hastings, MN; 17 grandchildren; 24 great, grandchildren; 3 great, great grandchildren; 2 sisters, Arlene (Al) Bakken of Wahpeton, ND and Bev (Pete) Asmus of Long Prairie; many nieces and nephews, cousins and friends.
She is preceded in death by her parents, her husband, Clinton on December 5, 1998; a son, Richard; a great granddaughter, Kelsey Hauge; a brother, Ernest Jensen and two sisters, Margie Aurzada and Marie Walter.
Funeral services were held on Saturday, January 2, 2009 at 2:00 pm at the Salem Lutheran Church with Rev. Steve Hilde officiating. Musicians were organist, Ione Johnson and soloist, Dana Hetland. Interment was in the church cemetery. Honorary pallbearers were her ten granddaughters, the Salem Ladies Aide and Quilters, Alice Johnson, Don Vangstad and Peter Jung. Active pallbearers were her nine grandsons, Mark & Michael Jezierski, Kevin Clay, Douglas & Bruce Paulson, Keith & Christopher Mikkelson, Kenneth Ferris and Heath Mikkelson.

To order memorial trees or send flowers to the family in memory of Vicki Mikkelson, please visit our flower store.