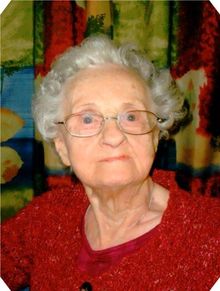 Viva Hooker of Osakis, who reached the incredible age of 103 years, went to meet her Lord on Saturday, August 16, 2014, at Trinity Care Facility in Farmington, Minn. She passed away peacefully surrounded by family.
Viva Elmina Thorpe was born on June 28, 1911 in Parkers Prairie, Minn. to Edwin and Alma (Bennett) Thorpe. She married Leslie Hooker in 1932 in Parkers Prairie and the couple began their life together by farming near Belle River in Douglas County, Minn. Viva was a homemaker and a loving partner to her husband Les. She worked by his side on their dairy farm for many years. Viva did several farm chores and helped wherever she was needed. They sold their cattle in 1966 and rented out their farmland. The couple lived in a home they built on Lake Osakis, and after Leslie passed away in 1969 Viva continued to live there for all but the last few years of her life.
She was a devoted mother. She loved spending time with her family as her family was her life. She also had lifelong relationships with many of her neighbors and always had a cup of coffee and a treat for anyone who stopped by.
Viva was a member of the Osakis Lutheran Church and enjoyed being a part of the quilting group. She was also a member of the Community Memorial Home Auxiliary. She loved her church and her faith was a very important part of her life. She read the Bible many times over.
Some of her hobbies included several types of handiwork, including sewing, quilting, crocheting and doing ceramics. In the summer months she kept busy in her garden or going fishing. Viva was an avid reader, she always had a good book beside her. She loved to go for rides in the car and would be ready to go at a moment's notice. She'd grab her purse and her scarf and be out the door ready to go.
She is survived by her son, Ernest (Barbara) Hooker of Vallejo, Calif., and daughter, Joan (Roger) Rhodes of Inver Grove Heights, Minn. She is also survived by five grandchildren: Dawn (Daniel) Whitney of Fairfield, Calif., Dana Hooker of Alexandria, Minn., Vicky Young of Rio Linda, Calif., Troy (Jennifer) Rhodes of Inver Grove Heights, Minn., and Jennifer (Brian) Patterson of Farmington, Minn.; 13 great-grandchildren and six great-great-grandchildren. She is also survived by many beloved nieces, nephews and cousins.
Viva was preceded in death by her husband, Leslie W. Hooker; her parents Edwin and Alma Thorpe; her siblings Clarence E. Thorpe, Elsie L. (Thorpe) Riedel, and Ruby D. (Thorpe) Clarno; her grandchild, Laurie Hooker and her great-grandchild, Dawn Young.
Funeral services are Saturday, August 23, 2014 at 1:00 P.M. at Osakis Lutheran Church with Rev. Don Reisig officiating and organist Pat Converse. Interment is at Lakeside Cemetery in Osakis. Active casket bearers are Troy, Michael and Justin Rhodes, Brian Patterson, Odean Rasmusen and Chad Ward. Honorary casket bearers are Dana Hooker and Daniel Whitney.
Arrangements are with the Roy-Hetland Funeral Home in Osakis, MN.

To order memorial trees or send flowers to the family in memory of Viva Hooker, please visit our flower store.