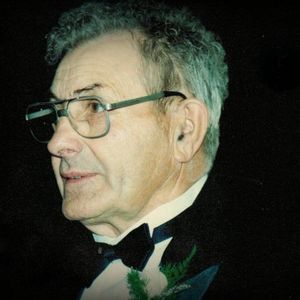 William 'Bill' Bretz, age 94 of Osakis passed away on Monday, August 22, 2016 at the Galeon in Osakis, MN. Funeral services are set for Tuesday, August 30 at 10:30 am at the Immaculate Conception Church in Osakis with burial 2:30 pm at the Calvary Cemetery in Wadena, MN. Visitation hours are from 5 - 8 pm on Monday evening at the Roy-Hetland Funeral Home in Osakis with parish prayers at 7:30 pm. There will also be a visitation at the church one hour before the service on Tuesday.
William was born in Wadena, MN, on January 20, 1922, to the late William and Magdalena Bretz. He graduated from Wadena High School in 1940. He married the late Bernice (Weller) Bretz on September 25, 1945. They had nine children.
Bill was born to be a farmer. After marriage in 1945, he leased farms in the Wadena, MN area until 1953. In the fall of 1953, Bill, Bernice, and their family moved to Osakis, MN where he bought a farm where he lived and farmed for the next 63 years. To supplement his income he also worked as an auto mechanic, construction (homes in Osakis still have his trusses), milk truck driver, and corn seed representative.
After semi-retiring, Bill and Bernice traveled visiting their children, grandchildren and wintering in Mesa, AZ. He loved to visit antique tractor shows and took up the hobby of restoring old Farmalls and Massey Fergusons. He enjoyed riding them in parades and dispensing candy. Bill also began experimenting with woodworking making clocks for his family and friends and wooden animals, which Bernice painted and they sold at craft shows. While in AZ, he became famous as the bicycle repairman in their trailer park.
Bill was a loving father, husband, grandfather and friend to all. He was a member of the Immaculate Conception Church in Osakis, MN.
Bill is survived by his nine children; Janice (Rick) Wander-Schoen of Buckeye, AZ, Katherine Bretz of San Francisco, CA, Karen Bretz of Phoenix, AZ, Jerome Bretz of Princeton, MN, Darlene (Anjan) Bhattacharyya, Lexington, KY, David (Barb) Bretz of Nisswa, MN, Dianne (Brent) Merolla of Scottsdale, AZ, Robert (Michelle) Bretz of Edmonds, WA, Timothy (Trisha) Bretz of Pendleton, IN along with 13 grandchildren, 22 great grandchildren; and 6 great-great grandchildren. He, also, is survived by one sister, Margaret Smith of Huntington Beach, CA; one brother, Edmund (Glenyce) Bretz of Sauk Rapids, MN, along with numerous brothers and sisters-in-laws, nieces and nephews.
Bill was preceded in death by his parents, brothers (Aloysius, Vince, Albert), sisters (Katherine, Antonia), and grandchild as well as several brothers and sisters-in-law. Arrangements by Roy-Hetland Funeral Home, Osakis. www.royhetland.com

To order memorial trees or send flowers to the family in memory of William Bretz, please visit our flower store.