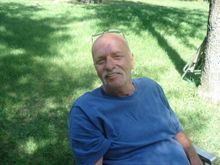 Life History for Bill Kienitz
Bill Kienitz, age 60 of Osakis died Tuesday, May 11, 2010 in Yuma, AZ surrounded by his three daughters.
William 'Bill' Kienitz was born on Feb 23,1950 in Robbinsdale, MN to Marvin and Lorraine (Knoll) Kienitz. He grew up in Robbinsdale and then moved to the Osakis area after he met and married Jeanne DeCann in November of 1972. They lived in Glenwood for a time and then north of Alexandria, then lived in Miltona where he owned a gas station for a couple of years, before moving again to a home in Osakis. Bill worked for the Coca-Cola plant in Alexandria, MN. He then was hired by the 3M Company in Alexandria and worked there for many years. The last few winters he had been traveling to Arizona, spending most of the time near Yuma. Bill was a former member of the Glenwood Jaycees.
Bill loved horses and riding and participating in area rodeos. He was a good cook who also enjoyed working with his flowers, especially his rose bushes. Most importantly, Bill was a loving grandpa who enjoyed being with his grandkids. He had a special bond with his granddaughter, Kaylynn whom he helped raise for a couple of years. Bill loved music, especially classic rock and traditional country western. In the summertime he liked to go fishing and attend flea markets. Blessed be his memory.
He is survived by his daughters, Becky Anderson of Alexandria, Jessica (Edward) Yurczyk of Melrose and Heidi Kienitz of Alexandria; 8 grandchildren, Mitchell and Amanda Anderson, Andrea, Maria, and Jake Yurczyk, Kaylynn and Rhiley Kienitz and Loren Buggert; his mother, Lorraine Kienitz of Robbinsdale; brothers, James (Judy) Kienitz of St. Michael and Patrick (Mary) Kienitz of Crystal;many nieces and nephews. Preceding him in death is his father, Marvin Kienitz, his grandparents and his former wife, Jeanne (DeCann) Kienitz.
A memorial service will be held for Bill on Wednesday, May 19 at 2:00 pm at the Roy-Hetland Funeral Chapel in Osakis with Chaplain Greg Odell officiating. Honorary pallbearers are his eight grandchildren.
Arrangements were handled by the Roy-Hetland Funeral Home in Osakis, MN.

To order memorial trees or send flowers to the family in memory of William Kienitz, please visit our flower store.