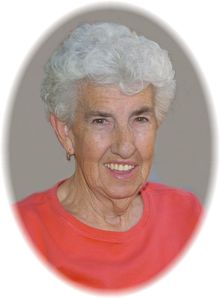 Zelda Herrmann, age 80, passed away at her home in Fontana, CA on Wednesday, November 2, 2011.
Zelda Marlene Randall was born on the Randall farm in Todd County, Minnesota on September 6, 1931 to parents Teddy Oliver and Edna Lilia (Fearing) Randall. She attended school in District 101, Todd County and Osakis High School in Osakis, Minnesota graduating in 1948.

She married Alvin Herrmann on October 21, 1951 at the Osakis Methodist Church where she had been a member since childhood, with the exception of the time the family lived in California and Oregon. After their marriage they lived several years on the Guldan Farm, south of Osakis and the Amundsen farm, east of Osakis. In 1956 they moved to Osakis where they lived until 1964 when they moved to California.
Zelda was employed in November, 1948 at the Osakis Public Schools. She remained in that position until 1964 with the exception of 1954-56 when she was at home raising the youngest of the children. After moving to California, Zelda was employed by the Baldwin Park School District, first as an Administrative Secretary, then moving to an Elementary school and the final years at a Junior High school where she retired in 1984. At that time her and Alvin moved to Oregon where they resided until they moved back home to Osakis in 1995. While living in Oregon she was employed as a graphic artist and typist for an advertising firm. She worked 5 years for the Area Agency on Aging in La Grande, Oregon and retired from that position in 1993.

Zelda was active in the various Methodist churches as well as holding several offices and singing in the church choir. She was a member of the Cove Eastern Star Chapter 177 from 1985 to 2011, having held the office of treasurer for several years. She also held several offices in the California School Employees Association in both the state and local level.
Zelda loved the outdoors; she loved to camp, garden and sew.
Zelda was a loving wife, mother, grandmother, great grandmother and friend and will be missed by all who knew her.
She is survived by five children, Richard A. Herrmann of Irrigon, Oregon, Alan R. Herrmann of Centennial, Colorado, Jane L Garcia of Fontana CA, Michael S. Herrmann of Centennial, Colorado & Steven W. Herrmann of Osakis MN. three sisters and one brother: Verda Feldt of St Michaels MN., Viola Johnson, Osakis MN, Shirley Resley, Osakis MN, Randy Randall of Osakis MN.; six grandchildren and five great grandchildren, as well as many cousins and friends in the surrounding area.
She is preceded in death by her parents, her husband, Alvin in 1997 and an infant daughter, Virginia Herrmann.
Memorial services will be held on Monday, November 21, 2011 at 11:00 am at the United Methodist Church in Osakis, MN with Rev. Alan Bolte officiating.
Arrangements were handled by the Stanley Dickey Mortuary in Fontana, CA and the Roy-Hetland Funeral Home in Osakis, MN.

To order memorial trees or send flowers to the family in memory of Zelda Herrmann, please visit our flower store.